Skip to content
Attention: Now Offering RAPID COVID-19 Testing for all patients, at both locations 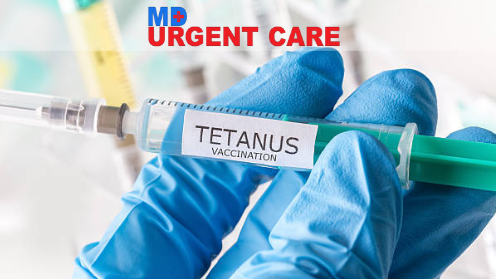 Tetanus is a dangerous and sometimes fatal infection, hence the vaccination is given during childhood and more precisely when a person has a wound or injury and their tetanus immunisation status is unclear. This disease is caused by Bacteria typically found in soil, particularly in farming areas, cause the disease.

What are the symptoms of tetanus?

The signs and symptoms of tetanus infection will usually appear two to three weeks after infection most commonly caused by bacteria entering the body from a cut or scrape or split in the skin.

The symptoms of tetanus include:-

The full course of the tetanus vaccine follows this schedule:-

What is the treatment for tetanus?

Tetanus can be very serious and will be fatal if not treated. Hospitalisation is required to thoroughly clean the wound and injections are given comprising antibiotics, tetanus immunoglobulin which stops the bacteria attacking the nervous system and a dose of the tetanus vaccine if the patient’s tetanus vaccine history is incomplete or unknown. Patients are usually admitted to intensive care and will remain ill for some weeks.

The only way to prevent a tetanus infection is by getting vaccinated on time. The tetanus vaccine shot is usually given in the deltoid muscle. Children are given shots in the thigh or arm.

If you need a tetanus shot then contact our vaccination clinic, details are on the website www.mdurgentcare.us

An Urgent Can You Can Trust. As Your Health Is OurFirst Priority.

A Guide To Healthy Eating

Influenza and the common cold in children